I had to chase a possum away from my food bag at 3am, but otherwise had an uneventful night. The possum was tame enough to be hard to scare off, of course. But once I did it didn’t come back. Maybe it just realized it couldn’t get at my food through my closed pannier.

Today I spent hiking around Cradle Mountain. They are advising people not to go out more than two hours away, due to the bushfires in the vacinity. I spent a good deal more than two hours hiking, though, by stringing together a bunch of the paths. On the recommendation of the tourers I talked to last night, I went up to Marian’s Lookout, which was a scramble but definitely worth it. But it was grey and cloudy in the morning so I started with a loop around Dove Lake. I hoped that it would clear up to make a hike to something with ‘lookout’ in the name worth it.

To get to the trails, there are a bunch of shuttle buses running the last 10km or so to the various trailheads. In theory, I suppose one could bike there, but I wouldn’t want to. Throw road is really narrow (I kept having to close myself eyes when the bus passed other vehicles at what seemed like far too fast a pace) and hilly. And the shuttles are free with park passes.

The Dove Lake loop is about 6km along paths and boardwalks. I learned later in the afternoon that one normally gets a good view of cradle mountain above the lake, but while I was there all I could see was clouds.

At one point the path went through something called the ‘Ballroom Forest’, but I couldn’t really see why. There were two trees flanking the path that made it seem like going through a door, but that was about it. 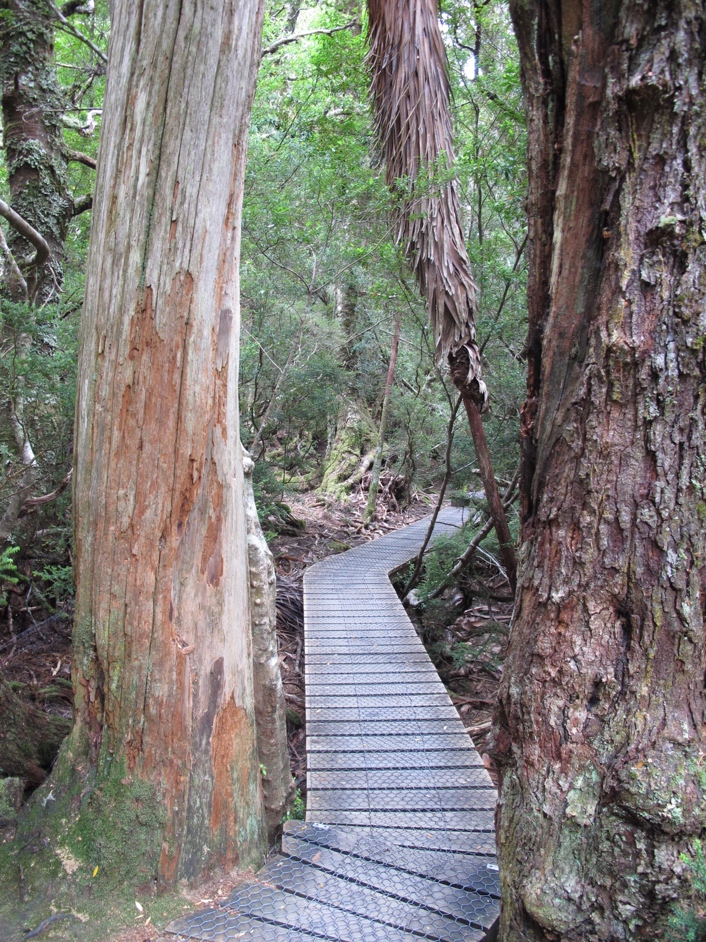 When I got close to the end of the Dove Lake circuit, I turned off toward Marian’s Lookout by way of a few other lakes (and a small pond called Wombat Pool). It was still a bit drizzly, but the clouds seemed to be lifting so I had high hopes for some views. As I walked down the path, various lakes were visible at once in what seemed like layers.

I met a couple coming down from the lookout who recognized me and asked if I had been in Strahan (yes). They had seen my tent with a bike and were thoroughly impressed. Not long after than, just above Wombat Pool, the trail I was on joined the beginning of the Overland Track on the way up to the lookout. So I merged with all the people with large hiking packs, feeling pretty nimble with just my camelbak.

The trail goes past Crater Lake, and then climbs up some rather steep rocky slopes. In places there are chain railings to hold onto, but no real rock climbing or anything. Eventually I made it to the top. For the last 20 minute of the hike it had been alternating between rain and sunny blue skies every 5 minute or so, and it continued to do that while I was at the lookout.

The views from the lookout were great, and I stayed for quite a while. But I was starting to get hungry, so I eventually turned around and went back down. It was a lot easier going down than up. The path back to the other shuttle stop went along a stream that had a few waterfalls despite the low water level.

I got back to the visitors center just after the cafe’s kitchen closed, but still got a wrap and a cappuccino. Then I wandered back to the campground by way of the campground store. The giant camp kitchen comes with microwaves, so even without pots and pans I could have a hot dinner. Microwave noodles and sauce aren’t so bad when you add a can of corn to them. Someone had also lit a roaring fire in the kitchen’s large fireplace, so I enjoyed that while letting my devices charge and listening to a book. It was pretty chilly by the time I went to bed, just as it was getting dark.